ARA France is organizing the XIth FIRA , in partnership with the city of Nîmes and its renowned Carré d'Art Library, the emblematic place for arts and culture of Nîmes.

More detailed programme and registration bulletin for the "Forum days" will be available at the end of january 2014.
See attachments.

It is not unusual that Belgian writers are not known as “Belgian” authors,even in their own country. Therefore, ARA Belgica, in cooperation with the Bibliotheca Wittockiana, decided to enhance the Belgian literary world through its coming event.
The Bibliotheca Wittockiana, renowned for its outstanding standards and know-how with regard to binding techniques, is the ideal place to host such a prestigious collection of classic or contemporary literature. 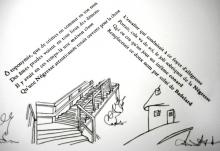 Quebec City boasts nearly 30 sets of outdoor stairs that link the Upper Town with the Lower Town of the Old City. Each stairway has its own name, personality and history. The oldest one is the "Escalier Casse-Cou" ("Neck Breaker Staircase"); it appears on architectural plans dating back to 1660. The longest one is the "Escalier du Cap-Blanc" staircase, leading to the Plaines of Abraham, with its 398 stairs.

Since ARA's creation in 1982, the prestigious FIRA event has been organized in various countries. After Monaco in 1988, Basel in 1990, Toulouse in 1992, Luxemburg in 1994, Montreal in 1996, Venice in 1999, Athens in 2002, Limoges in 2005, Freiburg (CH) in 2007, it will now be Bruges' turn to be host to the FIRA in 2011. This medieval Belgian city in a country located on the crossroad of Germanic and Latin cultures, has not only a great potential for such a cultural event but offers also a perfect setting which will be enjoyed by the participants.